As part of her first official visit to Chile, Sun Chunlanand herdelegationvisited the winery and were received by Alfonso Larraín, chairman of the company. 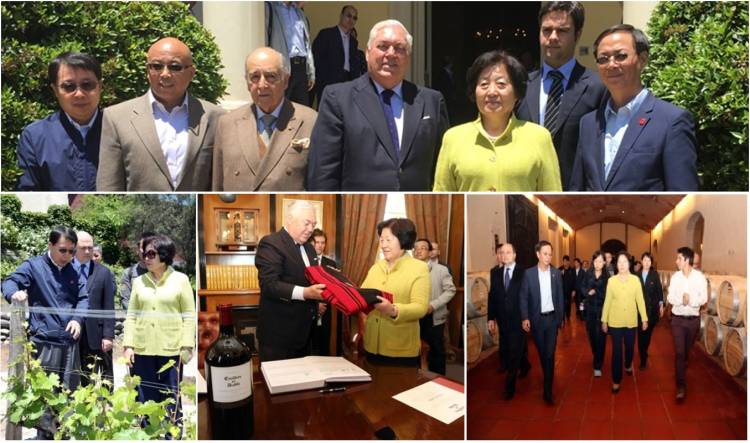 Sun Chunlan is one of the most influential women in the Chinese Communist Party. She has a vast experience in Chinese politics and has risen to become the Head of the United Front Labor Department and member of the Political Bureau of the Chinese Communist Party Central Committee. She arrived in Santiagoon November 10 on her first visit to Chile, with a very tight agenda that included the visit toViña Concha y Toro.

On November 12, Sun Chunlanarrived around midday at “Cellar and Winery Concha y Toro” in Pirque, accompanied by a delegation of approximately 20 people, including Li Baorong, Chinese Ambassador in Chile; Zhuo Li and Chen Xiqing, vice-ministers of the International Department and the United Front Labor Department, respectively, of the Chinese CP Central Committee.Alfonso Larraín, the winery’s chairman, welcomed her together with Mariano Fontecilla de Santiago Concha, director of the company.

«It is always an honor for Viña Concha y Toro to receive influential international visitors like Sun Chunlan. Our wines are real ambassadors in taking something very much our own to the world. It is therefore hugely satisfying that this Chilean product today reaches the homes of millions of Chinese.The visit of Mrs.Chunlan reaffirms the great potential and opportunity offered by this Asian giant, today one of the principal destinations of Chilean wine”, said Alfonso Larraín.

A very welcoming day that allowed visitors enjoy a unique setting and wines that have made Chile known in the world. Sun Chunlan thanked their hosts for the hospitality and attention received in Viña Concha y Toro. “This is a sample of mutual affection between Chile and China, and we assure you that we will continue working to make this friendship and economic relationship improve every day. We will remember this visit forever”, said.

During the period January-September 2015, China occupied second place as the export destination for Chilean bottled wine, with growth of 52% and 47% in volume and value respectively.Wines from France, Australia, Chile, Spain and Italy account for 90% of its total wine imports and, according to the Chinese Department of Commerce, the best-selling wine brand in that country in 2015 is Concha y Toro, surpassing the performance of Jacob’s Creek, Carlo Rossi and Torres.